I'm not having an extraordinary sort of day- would love to go and curl up somewhere and ignore the world!

The tv was on earlier and they showed a clip of people trying to set the human domino record- extraordinary and why?!!!!!!!!! Emma woke us up at another unearthly hour and I couldn't get to sleep until around 3am this morning anyway- by smashing one of my new bowls in the bathroom sink. She'd used the last of the milk on the cereal and had too much. I haven't seen a crack in the sink but must check it again. It's extraordinary just how many of the new bowls and side plates Emma has managed to break this year. Think she must have some sort of target set. The other extraordinary thing in this house is just how quickly the pile of mismatched socks builds up. 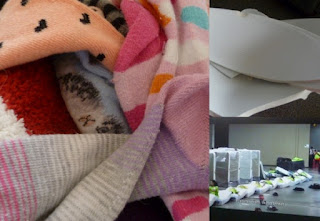 I uploaded the photos to the computer and found it had some photos from our holiday and the series really made me smile!!!!! (extraordinary today- I'm a right misery!). My mum used to love making sandcastles with the girls- and she was saying that she missed it. So we treated her to a mini 99p set with a bucket and spade and sand moulds etc (no expense spared!) and she had a wonderful time on the beach!!!!!!!!! It's extraordinary how much fun you can have for less than a pound.She'll probably kill me for putting that photo on facebook- so might go with the one of the socks!! 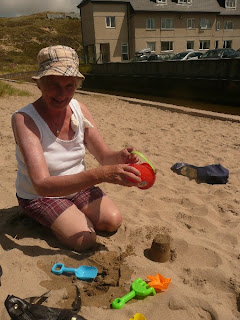 It was a friends sons birthday yesterday- and he was so very nearly a Leap year baby. He was born at a couple of minutes to midnight and Tracy says the midwives were urging her to hang on a bit!!!!!!

It's a bit of a sad day today- one of Guy's great uncles funeral. He had late stage Parkinsons and he just didn't want to fight anymore. He was an extraordinary old gentleman. He flew out to stay with my inlaws in Zambia at the same time as my sil. He was the oldest person EVER to have gone white water rafting on the Zambezi and he also enjoyed the safari. He also loved painting until he became unable to hold the brushes. Goodnight Uncle Les.
Posted by Unknown at 14:14