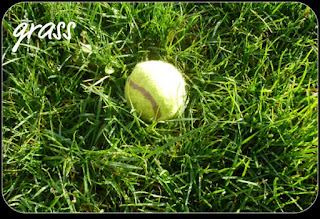 There are lots of signs around the house that we have Holly (the dog). She is obsessed with toys and has to check EVERY shopping bag that comes in because she doesn't understand how you could go shopping and not buy a new toy! Anyway today's prompt made me look at the garden- and there are signs of Holly out there aswell.

Unfortunately there is a race between Holly and the little boys next door to claim ownership of their toys. Actually the race is between us and Holly. This is one of the little boys tennis balls- they have a better class of tennis ball and Holly is particularly partial to them!!! So we have to try to get out there first. Holly's football is also on the lawn. She loves to 'head' the ball back to you- we've got photos of her on the beach where we set her a 'goal' up- and she's quite good!!!!!!! She tries to make a game from everything. 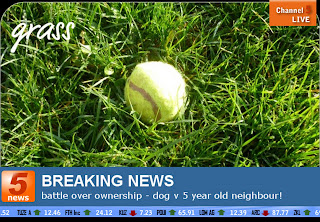 Everytime I do some gardening and these photos show that I desperately need to do some, Holly thinks I'd rather play 'Fetch' with her.

The signs were there when we 'chose' her at the dogs home. Her pen was absolutely full of toys and the other dogs had one or two at most. She also had a member of staff inside her pen playing with her- and she had a sign on her pen saying 'FREE". She was obviously labour intensive to keep!!!! She also came out of the pen with one of the toys in her mouth to go home with us. Whenever we come home she has to run to get a toy to greet us with!
Posted by Unknown at 10:05