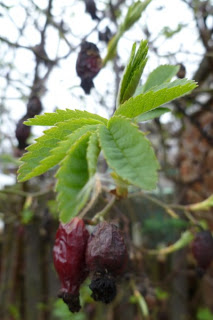 I took a photo of this the other day- but I tried to get Holly to go for a walk earlier and she refused to go. So we needed to take something in the garden. This is a wild rose hip. I do keep trying to cut it down- but the thorns are vicious and every time I try to prune it I ended up hurting my fingers.

Yesterday she set back home after I'd thrown the ball twice. We had a spell over Christmas and New Year where she refused to go for a walk- unless we started off in the car and went somewhere a bit prettier than round here. It's caused by people letting off fireworks- mostly at night but some in the day aswell. So she is terrified of going out of the garden.We only have one car- so we had to throw the ball in the garden a lot. I've been building her walks back up again- but the last few days she's been 'wimpy' again. I really don't know whether she's picking up the nerve vibes off me and thinks we need to stay close to home. Anyway today- just after she refused to go we had a FED EX delivery that I thought I'd arranged for tomorrow!!!! So maybe she's psychic! The parcel was full of meat- diced, minced and chicken, pork, lamb etc. I thought I'd try to get a whole months worth of food planned this month. I had used this company years ago- but thought I'd give it another try! Anyway- Holly was dancing down the path following her nose. The smell was driving her WILD! She had to poke her nose in the box. Everything was sealed - so no problem with her having a look! Then she gave me such a look. We try to feed her dry biscuits all of the time- but she would much rather eat tinned dog food or fresh meat. So this was a bit of torture for her! 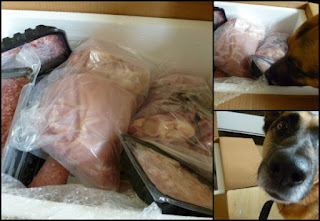 We went to see my sister last night- and she was only brought back up to the ward at 6 following a morning surgery, and she was still very groggy. I think she must be someone who doesn't tolerate the anaesthetic very well. It really worried my mum- and I was a bit late arriving anyway- so she'd gone in on her own. She had a bit of a grey pallor- so I hope she's pinked up again today. We don't know what they were able to do yet- and thought she should be the first to know.

This morning she was still very groggy- but the nurse said she'd smiled when she told her that her mum had rung. I'm going again tomorrow- as today is booked! My mum hasn't slept for a week- so I am hoping that she looks a lot brighter tonight.

The tivo box was fitted yesterday and we've got 6 months free Spotify- which is a music thing. So this morning I've had a few albums on that I wanted to listen to- Christina Perry and Rebecca Ferguson. I might work my way through the top 100 on their list. Listened to another that I could only manage a couple of songs!
Posted by Unknown at 14:25