Most of the pictures around the house are sea/beach related. We've had this one ages and it shows the natural shapes that can be found around the coast. I used to have a dish with shells in the same room along with little shelves with starfish on. I love shells. It's a bit of a cheat- so I also had a look for some real life shapes in nature! 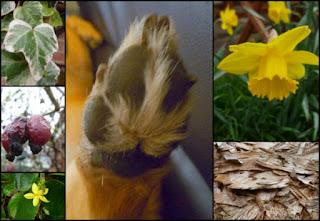 It's a bit wet and miserable out there- but had a quick dash around the garden and also couldn't resist taking HOlly's paw which was sticking up in the air whilst she's asleep! She doesn't like the rain- so she's busy recharging until the sun comes out. I found ivy leaves which I think are so pretty, rosehips which really need to come out when the garden is pruned, the daffodil and a pretty little yellow flower at the back of the garden that has survived longer than the others!
Posted by Unknown at 11:10