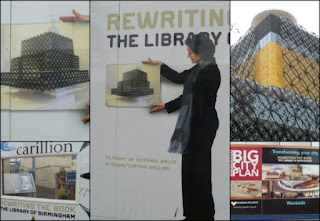 This one had me stumped today. I'm not really a fan of futuristic things. I read a book yesterday that was futuristic by James Patterson- Toys! I really struggled with it!

Then I remembered the futuristic look of the new library in Birmingham due to open next year. The boardings proclaim that they are rewriting the library and rewriting the book. There has been a huge fuss that they have spent so much money on a new library- when there is a functional one in the city centre already and a lot of the existing ones are either late Victorian or 60's monstrosoties that need urgent updating. I know of 2 library buildings that have been shut due to urgent building work. (read that as the buildings are too dangerous to be open to the public). The existing one In the city isn't a pretty building- but I guess it's debatable whether you consider the new one 'pretty'. I think it's wonderful actually that Birmingham sees libraries as being a part of our future. I think the new one is designed to be multi functional.

Had a disaster with the quick and easy tea last night. I was going to make a tuna and sweetcorn quiche using a pre made case. I smashed the case to pieces undoing the packaging- then the can opener broke and I couldn't get into the tins of tuna! So a quickly rearranged tea- chicken pasta bake!
Posted by Unknown at 12:32